Why Can’t I Last Longer in Bed?

It is true that premature ejaculation can have a variety of underlying causes. These causes can be physical, psychological, or genetic. They may have been present all along, or they could be newly developed. None of these causes is anything to feel shame or embarrassment over. They are incredibly common, and are largely out of a man’s control.

But no matter what the underlying cause is, the treatment is the same. This is why the technique we offer for overcoming PE suits almost every man.

The ‘here and now’ cause of premature ejaculation

The ‘main cause for PE’ is an inability to identify the ‘point of no return’. If, for some reason, you are unable to identify the signals your body is sending you during sex, you will not be able to pace yourself, and therefore, cannot prolong sex.

Take a look at the graph below – it describes the sexual process for men who don’t suffer from PE: 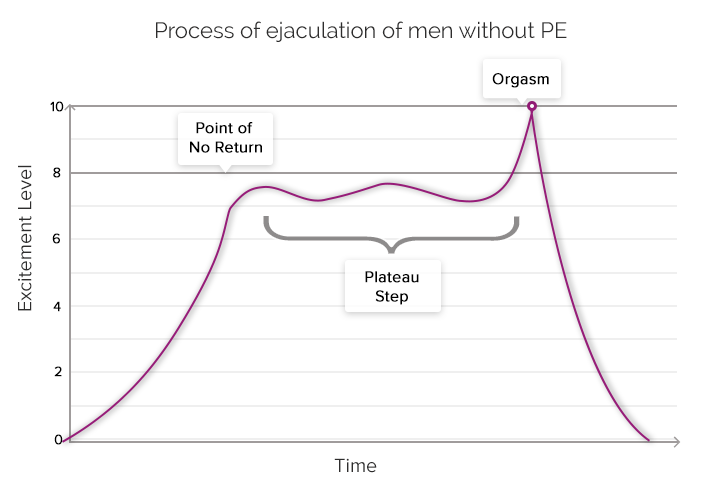 The sexual process has four steps:

The main difference between men suffering from PE and those who are not is the ability to extend and maintain the plateau stage.

Men without PE know how to identify the upcoming ‘point of no return’ and pace themselves. They use this ability to last longer during sex.

For a man suffering from PE, this stage is short to non-existent. The ejaculation occurs within a short time, mostly before he wanted it to, and with no capability of delaying it. 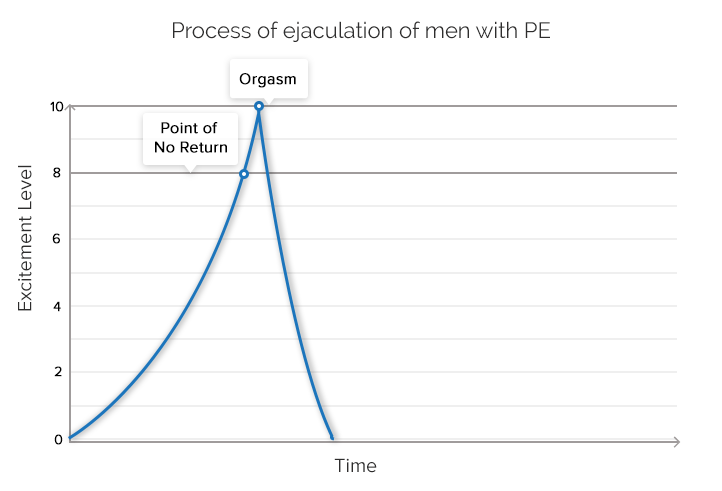 Premature Ejaculation – The Plateau Step Is Short to Non-Existent

If you suffer from PE your entire life, your inability to identify the ‘point of no return’ has prevented you from being able to build your sexual stamina!

If you started suffering from PE all of a sudden, or if you suffer from PE inconsistently, you have probably lost touch with your body, and you need to regain your sexual consciousness.

You can think about it as training for a marathon, you have to know your body, and pay attention to your heart rate, muscles and breathing…. If you are not in sync with your body, you will probably tire yourself before the end of the run. Only after you get to know your body’s responses can you practice running long distances. Controlling ejaculation is the same.

This is why the key to overcoming PE is to learn to be aware of the feelings you have during sexual arousal, learning to identify your ‘point of no return’, and then use this ability to practice building your stamina.

For many years, the cause of all premature ejaculation cases was thought to be a learning behavioral problem. Research now shows that premature ejaculation can be caused by a variety of factors. The truth is that, for most patients, the underlying cause remains unknown. With that said, it is good to understand the possible causes.

What Does All This Mean?

Some men may be able to easily determine the cause of their premature ejaculation, while others may never know what is behind the issue. What is truly important is to know that, no matter what is causing the issue, it is treatable with an exercise-based program.

*We have to note that in rare cases, premature ejaculation could be caused by medical conditions such as diabetes, erectile dysfunction, neurological conditions such as Multiple Sclerosis, or urological disorders such as urethritis. We recommend having regular wellness check-ups, or seeking the advice of a doctor, especially if premature ejaculation has started suddenly. However, the majority of cases are caused by one of the following factors.

How to Last Longer In Bed – The Complete Guide

How to Treat Premature Ejaculation